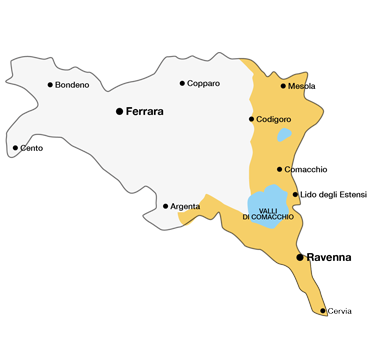 The PODS of Bosco Eliceo

The eastern part of the province of Ferrara is the territory of the "Vini delle Sabbie," Sand Wines.

This is a truly unique wine-producing area, an Adriatic coastal zone between the estuaries  of the Po and Rubicon Rivers, consisting of dunes that parallel the coast, woods, brackish valleys, and salt pans, which also includes the Parco Regionale del Delta del Po.

Here the primary variety, grown since the 11th Century, thanks to the drainage carried out by the monks of Pomposa, is Fortana, also known as Uva d'Oro (from Côte d'Or, in Burgundy, from where Renée of France is said to have brought it to the Duke of Este as part of her dowry).

Regardless of the name, what one finds now in the vineyards are low, centuries-old vines. Indeed, thanks to the sandy terrains they were able to resist the phylloxera outbreak (at the beginning of the 20th Century) and are therefore -- the only case in Italy -- on their original roots.

The strong identity of these vineyards, however, derives from the extreme conditions of their habitat: a damp environment, with impenetrable fogs, where the air is briny and the terrains sandy and extremely infertile. The sea and the absence of fresh water (many roots reach down to salt water) are among the elements that confer unique savory accents to these wines.