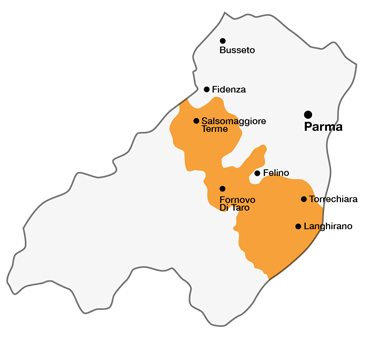 The PODS of Colli di Parma

The Colli di Parma zone is a magical land between the Enza and Stirano Rivers, at altitudes ranging between 200 and 800 meters above sea level. Because of its geological and climatic characteristics, the viticultural qualities of the area have been known for centuries, or, to be precise, since Napoleon's time. Indeed, when Napoleon placed Maria Luisa of Austria and a group of French officials at the head of the Grand Duchy of Parma, they took up residence in villas in the surrounding hills and began producing the fine wines that have become a tradition of the area. The hills extend over 47 communes; those with the most vineyards are Langhirano (already famed for its Barbera in the 1800s), Felino, and Sala Baganza. The most prevalent indigenous varietals are Malvasia, Moscato Bianco (often in association with Malvasia), and the Barbera-Bonarda, pair, generally blended. Production is generally of semi-sparkling wines, and also includes Lambrusco, but there are also still whites and reds, some of which age well.